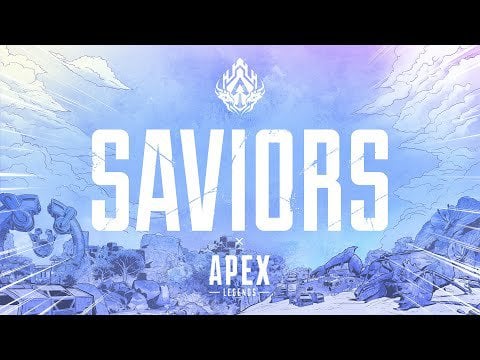 Get your snacks and settle in, Legends. Patch notes are here and a day early! Check out the [Saviors Patch: Game Play Trailer linked here](https://www.youtube.com/watch?v=cOFuEQEvC3E&ab_channel=ApexLegends) if you haven’t already!

For years, Newcastle defended the small town of Harris Valley, making it a safe haven for all who lived there. Now to fulfill that mission and continue defending his home, he’ll have to prove himself a hero among Legends. In the Apex Games, Newcastle can use his Knockdown Shield to protect his squadmate as he revives them, and even drag them out of harm’s way. He can charge into the fray with a Mobile Shield, blocking weapon damage and deflecting grenades, while his Ultimate erects a fortified Castle Wall.

Drag allies as you revive and protect them with your Revive Shield.

Throw a controllable drone that creates a moving energy shield.

Leap to an ally or target area and slam down, creating a fortified stronghold.

With this being the first map update to Storm Point, our goal was to add new content and improve map features while not subtracting anything. We added a brand-new POI; a washed-up sea creature known as the Downed Beast—which is a unique combat experience for Apex Legends—an organic combat zone, and a refreshing change from man-made architecture. On top of that, we added a brand new PvE feature, IMC Armories, at four strategic locations around the map which can dynamically change the championship outcome. Be wary here, you will encounter waves of Spectres but if you survive you can earn sweet loot tailored to your loadout.

[***Check out all the details in our Storm Point Update Blog by Senior Level Designer, Keith Jensen.*** ](https://www.ea.com/games/apex-legends/news/monstrous-storm-point-map-update)

The map rotation for the season for Saviors will be Storm Point, Olympus, and World’s Edge. We’re also removing the longer 2-hour rotation block. We felt that could be too long considering it could span the whole play session for some people.

Apex Legends: Saviors’ upgraded Ranked system adds tier demotions, entry cost adjustments,, and a rework of Ranked Points to promote teamplay. The current Ranked goals revolve around Teamplay for Victory, and Accurate Skill & Better Competition. We are making a large number of changes that focus on these two core pillars, with the outcome that players will focus on playing as a team and playing for the win, and RP will be a more accurate representation of your overall game skill.

[***Read the full blog detailing all the changes coming to Ranked Mode this season here.***](https://www.ea.com/games/apex-legends/news/saviors-ranked-update)

* Improved recoil at the start of the pattern

* Spitfire back to floor loot
* Mastiff into crate

* Cells and Syringe spawn rates have been lowered by about 18%

* Can no longer freely spin while launching during Skyward Dive

* When going out of bounds the following will be disabled:
* Legends Abilities
* Weapons, Ordinances and Survival Items
* Healing items (Will not cancel mid healing)
* All Active Passives (e.g. Valks Jet Packs)

* Redesigned windows at Lava Siphon’s Control Tower to focus sightlines
* Added some additional cover around Lava Siphon’s Lava Pit
* Gondola loot has been tweaked. The chances of finding high-tier armor in them have been notably reduced. Climatizer and Lava Siphon will still remain as High Tier Loot POIs

* Fix for players inside of Bangalore smoke unintentionally getting aim assist on targets outside of smoke.
* Fixed bug where Valk could no longer use Jumptowers if she has been previously shot down during her Ultimate.
* Fix for Volt animation for cases where the weapon and reticle have a jittery animation when the player is crouched.
* Fix for cases where weapons and attachments can be dropped/switched during Charge Tower interaction leading to animation glitch.
* Fix for Charge Rifle Legendary skin “Curse of the Amazon” where the upper part of the weapon blocked camera view when aiming down sites.
* Fixed bug for cases when the user accesses the replicator and pulls up their inventory before the UI for the replicator shows up, they can drop their weapon and is stuck in a crouched position.
* Canyonlands: Fix for cases when players could get blocked when trying to activate Valk’s Ultimate.
* Fixed a bug where Season Trackers were no longer showing what season stats they are tracking.
* Fixed bug where the Sentinel could charge instantly when vaulting.
* Xbox One: Fix for cases where players sometimes had to skip the Legend Select phase due to being stuck on the “waiting for players” screen.
* Fixed issue when Knocking a player on an enemy team and then dying before getting the kill, can lead to the kill being rewarded to another team instead
* ARENAS – Fixed issue where Boosted Loader was missing on Wingman.
* Fixed issue where Finishers are not counted as damage towards Challenges.
* Fixed bug where Purple Evo shields glow through closed care packages, loot pins, and Lifeline Care Packages.
* Fix for cases where players could get killed by a death box if coming in contact with it on an airship.
* Fixed bug for an issue with Players getting killed when throwing a caustic barrel up against an opening door.

* Fix for cases when Crypto’s heirloom (sword) appears stuck in the middle of his body while his drone is deployed.
* Fixed issue when inspecting his Heirloom with the “Deadly Byte” skin equipped, can show missing arm texture.
* Fix for cases when players could recall their Drone instantly after activating their Ultimate.
* Fixed bug for when Crypto is using his legendary skin, and while being revived by a Mirage, he turns invisible except for his sunglasses which remain visible during the revive.

* Fixed bug where using Fuse’s Tactical in water caused the audio to get overwhelmingly loud.
* Fix for bug where players can extend Motherlode’s range if used on flyers, Crypto’s drone, loot drones, and Loba’s Bracelet.

* Fix for cases when Horizon’s Ultimate disappears if the player opens a door next to it.

* Fix for bug where the shield regeneration from Wattson’s ultimate would reveal Mirage’s location when he is invisible while reviving.
* Fixed bug for when Mirage’s decoys would sprint faster when the player is armed with an item than when they are unarmed.

* Fix for an issue where grappling grounded Loot Rollers can cause the player to get flung at high velocity.